Welcome to Skin Memoirs. I am Dr. Joanne L. Rondilla. My educational training is in Ethnic Studies. Unlike any other academic discipline, Ethnic Studies was born out of the various civil rights movements of the 1960s. In particular, the San Francisco State Strike (1968-69) and the Free Speech Movement at UC Berkeley gave rise to students and community members demanding a more inclusive educational curriculum. Proudly, I am one of many beneficiaries of the Ethnic Studies legacy. By the time I went to college in the mid 1990s, I had the opportunity to major in Asian American Studies. Years later, I found myself enrolled in UC Berkeley’s Ethnic Studies graduate program, where I earned my M.A. and Ph.D.

My research focuses on colorism, specifically with respect to Filipinos in the U.S. and abroad. One cannot explore the contours of colorism without a robust understanding of racism, and its deep connections to colonialism. In addition, I teach courses on various topics including: pop culture, race and media representations, literature, globalization, history, etc. Skin Memoirs was born out of a need to make sense of not only my research and teaching, but what is going on in this particular historical moment. Issues of race, gender, sexuality, skin color, colonialism, etc. are reflected in our everyday lives. However, because of the lack of critical conversations around this, these issues often go un-noticed. Skin Memoirs is my contribution to bringing these issues to life.

Admittedly, going through the pangs of academia has silenced me over the years. I often experience major writing blocks – especially when writing for the world of publish-or-perish. Feeling the pressure of every word and every idea needing to be perfect for your tenure file is overwhelming for all academics, but especially for women of color in the ivory tower. Years ago, I had a blog, which I eventually took down because blogs and other forms of public knowledge (I was told) is seen as undesirable in the academic job market. However, after a conversation with Lori L. Tharps, continued chats with Kat Chow regarding my research, and various other conversations with respected people that ended with: “You need to write that down,” I decided that it was time to re-visit this form of intellectual engagement. Today, as I reach the milestone of turning 40, I hark back to the great Audre Lorde: “Your silence will not protect you.” 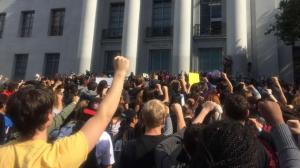 This photo is from a recent rally at UC Berkeley. Students from the neighboring Berkeley High School organized a walk when their campus computers were hacked and announced death threats against African American students. Approximately 2/3 of their students participated.

In fact, remaining silent on the issues that are near and dear to me is what has made 2015 look a lot like 1945. As I write this, there is a presidential candidate whose campaign is fueled by anti-Muslim hate speech. Inspired by the University of Missouri football players refusing to play until campus administrators address longstanding racial issues, university students across the country have organized with similar demands. The fight to raise the minimum wage for all workers mirrors the demand for equity for adjunct professors. Rampant gun violence and police brutality against black and brown bodies have become an almost daily headline. The country’s demographic is changing and people are panicking in racist and violent ways. The nation’s first African American president is will soon end his term, and around the corner, the 2016 elections are before us. Yet, the many things that our lolas and lolos (grandmothers and grandfathers) fought for during the civil rights era seem to have been forgotten. Given the current political climate, we cannot afford to be silent anymore.

I became an Ethnic Studies scholar to make sure that the legacies of the civil rights movement would continue, that I would contribute to a world that was closer to achieving equity for all people (especially those who have been historically and institutionally disenfranchised). For me, that happens in the classroom. It happens in the conversations we are having with each other. It happens in the writing. Writing is how I make sense of things.

Skin Memoirs is about us: the skin we live in, and explores how our bodies have historically defined our value. It investigates how we continue to live, thrive, and exist. On some days, the entries will be simple quotes, articles, and videos. Other days, I will share some of the work and ideas that I am developing. On occasion, I will re-post entries from my former blog, Beautiful Women and Lanzones. At the end of the day, Skin Memoirs is about keeping our stories, memories, and the issues that are most relevant to our communities alive.

In the long run, I hope to turn the Skin Memoirs blog into a major project that inspires more critical conversations, educational materials, community programs, art projects, etc. For now, Skin Memoirs is just a blog that will start it all….

P.S. I would like to extend a very special thank you to my students who have been instrumental in inspiring me to start this project. Many thanks to Robert Souza, who helped me access the cover images.